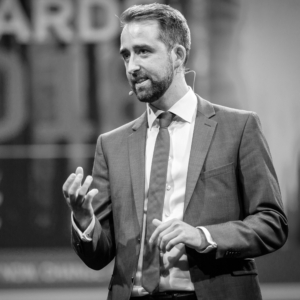 Darren Ryan is the CEO of Social Entrepreneurs Ireland (SEI), a not-for-profit organisation that supports people who have new ideas to tackle Ireland’s social problems. They provide a range of programmes, supports and funding to help people to get started and bring their idea to scale. Since its foundation in 2004, SEI has supported more than 300 social entrepreneurs, who in turn have impacted the lives of over 1.7 million people.

Darren has spent over 10 years working with social entrepreneurs and social enterprises. He is a Founding Director of SERI (Social Enterprise Republic of Ireland), the representative body for social enterprise, and previously served as the Chair of the Soar Foundation.

Darren currently sits on the Council of the Dublin Chamber of Commerce. Previously Darren was a member of the Ireland Funds Young Leaders Committee, was the Dublin Ambassador for Sandbox (a global network of innovators and entrepreneurs), and many moons ago was named among the top 30 under 30 entrepreneurs in Ireland by the Irish Independent.