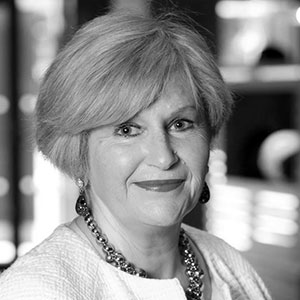 Maura Quinn CDir is Chief Executive of the Institute of Directors in Ireland and a Chartered Director. Maura has held this role since April 2008. As Chief Executive, Maura is responsible for leading the strategic development of the IoD through growing the membership base, expanding the range of programmes and services and building the profile of the organisation. In 2019, Maura was appointed as a board member to Rugby Players Ireland. She was a a non-executive director of the Coombe Women & Infants University Hospital from 2014-2020.

In September 2008, Maura spearheaded the introduction of the IoD Chartered Director Programme, which is the most sought after and prestigious director qualification in Ireland. She is a leading voice on the importance of director training and board diversity and a keen advocate of the need to improve corporate governance standards and the quality of boards in Ireland.

Prior to joining the IoD, Maura was Executive Director of UNICEF Ireland for eleven years, where she was credited with the resurgence, growth and development of the organisation in Ireland. Having operated at a senior level with UNICEF HQ in New York and Geneva, Maura was also elected Vice-Chair of UNICEF’s Standing Group of National Committees, which generate one third of UNICEF’s income worldwide.

Having studied Law and Marketing, her career has included a range of senior appointments in both the private and not-for-profit sectors.

Q: How have you and your organisation adapted and embraced the new normal?

A: We quickly adapted and were absolutely determined from the outset to remain relevant for our members. Fast adaption to going online and providing a range of quality events and resources for members were key. We also assisted our Chartered Director Programme participants who had completed some modules to sit exams if they wanted to do so. Equally important was recognising the huge human impact of the crisis on everyone and ensuring we were empathetic and supportive. It was not business as usual, it couldn’t be. The IoD team were fantastic at adapting to change and to constantly thinking up new and better ways of communicating with our members. We have learnt from this. The new normal will be different, but I’m a great believer of and advocate for change!