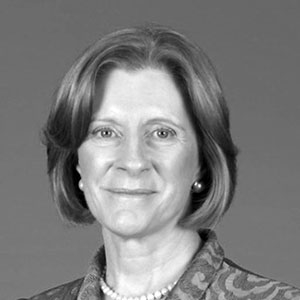 Professor Frances Ruane has been a Research Affiliate at the ESRI since October 1, 2015. She previously served as Director of the Institute between 1 December 2006 and 15 July 2015, when she was succeeded by Professor Alan Barrett. She is currently a member of the Economic Advisory Group in Northern Ireland and the European Statistical Advisory Committee (ESAC). She was appointed a member of the new Council of Economic Advisers in Scotland in January 2015, having previously served two terms 2007-2011 and 2012-2014. She is also a member of the Executive Committee of the European Statistical Advisory Committee (ESAC) and an Honorary Professor in the Department of Economics at Trinity College.

She has published extensively, especially in the fields of international economics and industrial development. Her current research interests centre on exploring the innovation and exporting behaviour of enterprises in the manufacturing and service sectors. Frances Ruane is a member of the Royal Irish Academy and was elected an Honorary Fellow of Trinity College Dublin in 2010. She is also on the Council of the Statistical and Social Inquiry Society of Ireland, the Council of Economic and Social Studies, and the editorial boards of the Journal of International and Economic Policy and the International Review of Economics and Finance.

Earlier in her career, Frances Ruane represented Ireland on the European Advisory Committee on Statistical Information in the Economic and Social Spheres (CEIES) from 1998 to 2008. She has served as a member on a number of Irish State Boards, including the National Board for Science and Technology, the National Theatre Company (the Abbey Theatre), the Industrial Development Authority, Forfás and Bord Gáis Eireann.

In addition, she has participated on numerous governmental advisory committees/groups, including Funding of Third Level Education, Tax & Social Welfare Reform, Future Skills Needs and the Research Prioritisation Steering Group. She was also a Research Fellow of the ESRI from 1974 to 1976. Prior to joining the ESRI, Frances Ruane was Associate Professor in the Department of Economics in Trinity College Dublin, where she also held the posts of Director of the Policy Institute and Director of the MSc programme in Economic Policy Studies.

Earlier in her career, she held positions in theIndustrial Development Authority, the Central Bank of Ireland and Queen’s University, Kingston, Ontario. A graduate in Economics, Politics and Statistics of University College Dublin, Frances Ruane studied Economics at Nuffield College and was awarded the degrees of B.Phil. and D.Phil. from the University of Oxford.